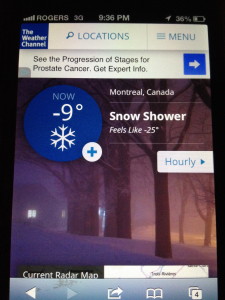 Since we have to start somewhere, we’ll start with a recent trip to Montréal and Mont Tremblant. I’ll paint the picture. It was Saturday morning in Montréal, and we’d just filled our bellies with another cheese-covered meal. Seriously, why doesn’t everyone in Quebec weigh at least four hundred pounds? Between the foie gras, cheese curds, and duck fat, my arteries barely made it out alive. Anyway, we were rested and full, ready to explore on our final day in the city. That morning, as we’d packed our bags for our evening flight home to New York, I relocated my passport from the bottom of my suitcase to my purse. I rubbed my belly, which began to grumble slightly from the influx of grease, and reminded Gavin to make sure he kept his passport on him.

‘Funny,’ he said with a smirk.

I squinted, trying to remember if he’d given me his passport at any point during the trip. He hadn’t.

‘You’re joking,’ he said more hesitantly, ‘right? You have it?’ He stared, searching my expression.

I wasn’t. I really wasn’t. Our pranking had gotten a little out of hand lately, but this unfortunately wasn’t one of those times. We hightailed it back to the hotel and pulled our luggage from storage, spreading it out in the hotel lobby, to the slight dismay of the concierge, who looked at us with a mixture of pity and annoyance. The damn passport had to be in there somewhere. I mean, it isn’t that small, it can’t just disappear? We looked everywhere, in our suitcases, our backpacks, inside our shoes, jackets, even those gross side pockets where dirty underpants accumulate. We pictured it lounging on the beach with a pina colada and an innocent ‘what me?’ smile composed of security stickers. Where had it gone?

After we’d searched all of our bags, panic started to set in, and Gavin let out something between a whimper and a sigh.

‘If this is a prank, now would be the time to tell me,’ he said half-heartedly.

‘I wish,’ I said, unable to meet his eyes. Why hadn’t I taken his passport? Kept his and mine together, let them intertwine their pages in holy paper matrimony.

At some point, we had to admit defeat. Two people, one passport. Married or not, I couldn’t think of a way the US Border Control would let that fly. Literally. I started to weigh my options. I still had my passport. I could go home, spend a few mildly uncomfortable nights alone while Gavin drowned in Molson and duck fat waiting for the US Consulate doors to unlock Monday morning. But I didn’t want to leave him. Hell, I didn’t want to go to work on Monday. We were a team, we would stick together like our passports had failed to do.

As a last resort, Gavin called the emergency US Consulate number. You know, the one you call when someone is kidnapped or arrested while abroad? And yes, technically Canada is still abroad.

Gavin gave the responder his name, social security number, and briefly explained the situation. Want to go home. No passport. The responder said he’d call back shortly and abruptly hung up. While we waited, we aimlessly tried to distract ourselves with a few rounds of ‘I can solve a game of Solitaire faster than you can.’

‘I’m sorry sir,’ a different voice said, much more kindly than the first. ‘There’s no way we’ll be able get you a new passport before your flight this evening. You’ll have to wait until the Consulate opens on Monday.’ He paused. ‘Or, you could drive,’ he mentioned offhandedly.

‘Drive?’ Gavin coughed. ‘We can drive across the border without a passport?’

The voice on the other line, Gary if I remember correctly, confirmed that was the case. As long as you had a driver’s license (and an angelic face, I surmised, thanking God Gavin had decided to shave a few days before and was more or less beard-free), you could cross the Canada-US border by car. Who knew? Gavin and I gave each other excited glances as the call wrapped up. I looked up car rentals on Kayak, and before we had re-packed and zipped our suitcases, we had a plan. A seven-hour plan, but a plan nonetheless.

After finding an acceptable US-bound car at the airport Avis and canceling our flights, we were roadward bound. It was dreary on the interstate, dirty snow on the shoulder and salt spray on the windshield. When we were five miles from the border, my palms started to get sticky. Gary had said it would work, but would it really work? At least if we were in Montréal, there were restaurants and bars and hotels. Here, all we could see was highway, trees and snow. Lots of snow.

As Gavin flicked the wipers to clear the salt from his line of sight, we heard a loud crack. The driver’s side wiper went flying into the roadside abyss, and I couldn’t help but laugh. Could we get across the border without a passport and a windshield wiper? We didn’t think it was likely. We turned off at the next exit to find a service station, and after a few turns, a few miles, and a helpful gas station cashier, we found a mechanic, who took a few minutes from working on a schoolbus to replace the wiper for a small fee. And with that we were back on our way. We cruised incident-free to the brightly lit border. The line was only a few cars long.

Gavin smiled half-heartedly and pulled up to the booth.

‘Hello,’ he said, passing over my passport and his New York state driver’s license to a uniformed guard that looked more park ranger than customs official. Gavin explained the situation and the mysterious disappearance of his passport. ‘I have the number though,’ he added, reciting the digits we’d found in an old gchat conversation.

‘How’d you manage that?’ the guard said in an impressed, midwest laden tone. He scanned my passport and clicked a few buttons on a screen we couldn’t see.

‘Can you describe your appearance in your passport photo?’ he asked, looking between the screen and Gavin.

‘I was fatter then,’ Gavin deadpanned, getting a small chuckle from the guard. Make him, laugh, I thought. Charm your way across the border.

‘What color shirt were you wearing?’ the guard prodded.

Does anyone remember what they’re wearing in their passport photo?

‘I really don’t know,’ Gavin said. ‘I could guess, but it would really be just that: a guess.’

‘Did the shirt have a collar?’ the guard continued.

I stifled a laugh. Was this guy serious? I had just looked at my passport photo and couldn’t have told you if I’d been naked.

‘I could guess,’ Gavin repeated. ‘But I could be wrong. I really don’t know. I’m sorry.’

‘What’s in the bag?’ the guard asked, pointing at a large snowboard bag propped against the window in the backseat.

Say something funny, Gavin, I silently begged. Otherwise, here comes the part where they search the car, pat us down, cart us off to a windowless room somewhere.

‘A snowboard,’ Gavin said. ‘We were in Mont Tremblant snowboarding.’

Not funny, but true. At least for Gavin. For my part, you could say I tried to snowboard. I’d taken one half-day lesson that ended in a bruised coxis and a bruised ego. And a not-so-latent jealousy for everyone that had mastered the sport.

The guard shrugged, handed back our documents and wished us luck. That was it? Really? Apparently, with none of the right answers, we’d still passed the test. We were officially back on US soil, headed for home, and I couldn’t have been more thankful.

‘Thanks for not mentioning that, Dexter,’ I said, pinching his cheek. ‘You must have an innocent-looking face.’

All of the nervousness that had built up over the course of the day subsided, and after a few hours of driving through the dark, dense forests of upstate New York, we began to get tired. I’d never been to Saratoga Springs, so Gavin suggested we find a cheap hotel and stay for the night. I figured we might as well continue the adventure and let off some steam. We could get back to reality in the morning.

After a nice meal and a few well-deserved beers at the coolest local bar I’d been to in a long time, we couldn’t stop laughing about the course our day had taken. We went to bed happy and carefree, with what I could only surmise would be another adventure in the morning.

Oh right, whatever happened to the missing passport, you say? About a week after we returned from our trip, a kindly housekeeper from our hotel in Mont Tremblant found it in the Lost and Found. Why it took so long to surface, we’ll never know…

Places we loved on this adventure:

Au Pied de Cochon, 536 Duluth Street East, Montréal – It might be a gluttonous meal, but not one you’re likely to forget. Amazing with a capital A. Try the Foie Gras Cromesquis (liquid foie gras deep-fried in duck fat), Foie Gras Poutine, and the Duck in a Can. You’re going to eat fatty while you’re in Quebec anyway, so it might as well be the best. Pricey.

L’Assommoir, 112 Rue Bernard Ouest, Montréal – We had a delicious lunch here, hiding out from the sub-zero temperatures and soul-chilling winds. I had a hearty meal of meatballs in a spicy tomato sauce, perfectly-cooked vegetables, and a hot toddy. We came back later that evening for drinks. The cocktail menu is not for the indecisive (there were 100+ choices), but the bartenders know what they’re doing, that’s for sure. Middle of the Road.

L’Orignal, 479 Rue Saint Alexis, Montréal – When you arrive, you feel like you’ve walked in a cheerful hunting lodge, if there is such a thing. The Bison Tartar and Rabbit Cavatelli fit in perfectly with the theme and my tastebuds. Pricey.

Auberge du Vieux-Port, 97 Rue de la Commune Est, Montréal – The perfect boutique hotel in the Old Port, make sure you reserve a room in the original part of the building. Antique furniture, large bathrooms with rain showers, views of the river, and breakfast included. All for $200 or thereabouts.

Creperie Catherine, 113 Chemin de Kandahar, Mont Tremblant – This is the place to get your fill on crepes. The place is small, so there is often a line, but it’s worth the wait. Savory crepes, sweet crepes, breakfast crepes. They have everything you could hope for in the crepe department. I tried both the Seafood Crepe and Catherine’s Special and was not disappointed, to say the very least. Easy on the Wallet.

Saratoga City Tavern, 9-21 Caroline St, Saratoga Springs – We stumbled into what I think is probably the best bar in town. Live music, 20+ taps, all with clean lines, and two open seats at the bar. The perfect end to another unexpected adventure. Easy on the Wallet.